I actually first tasted this dish prepared by my mother-in-law. Subsequently when I got the chance to travel to China, I also managed to order this cold dish from a restaurant! My father, a retiree, likes to travel to all parts of China, and he will always bring back packs of dried black fungus! Of course local supermarkets & provision shop have dried blackfungus, but the varieties is lesser compare to China. You can see the picture below on the varieties of black fungus, all from China!
So much on black fungus, do you know the benefits of black fungus, 黑木耳? They are very rich in iron and low in calories. It is also known to help reduce LDL cholesterol, treat hemorrhoids...A healthy & nutritious food which I do not mind eating more :)
Reading on Black Fungus : Ref A, Ref B,
My way of dressing up the black fungus, with 'agaration' from what I've tasted in the restaurant and my mil's version :) spicy and tangy salad dish. But looking at the picture, I realized something missing >.< I forgotten to toss in some toasted sesame seeds! hahaha 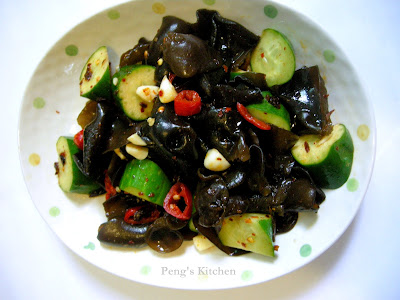 These are the varieties of dry black fungus I have in my pantry!! 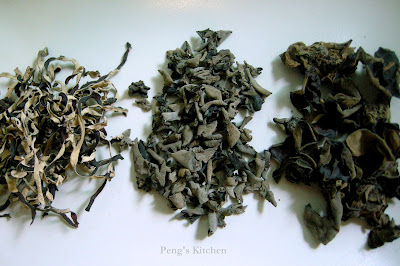 This is how they look after soaking! 3 different texture! 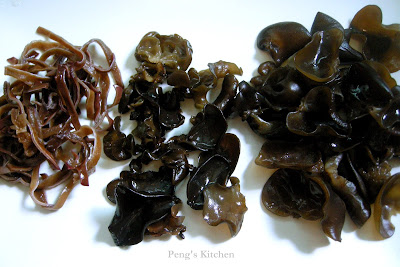 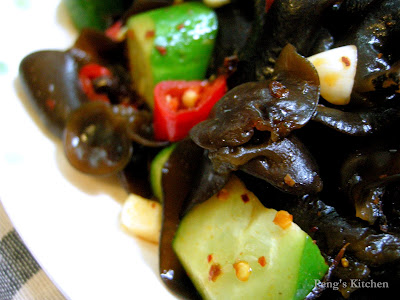