Light & refreshing light lunch to beat the afternoon heat! Avocado chicken salad croissant serve along with a glass of homemade lemon barley and lots of chilled watermelons. Next round I must double the salad recipe as it was not enough to go around the table hehehehe... 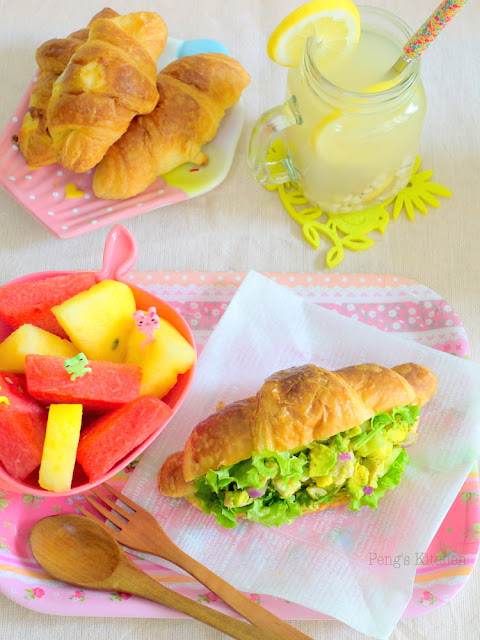 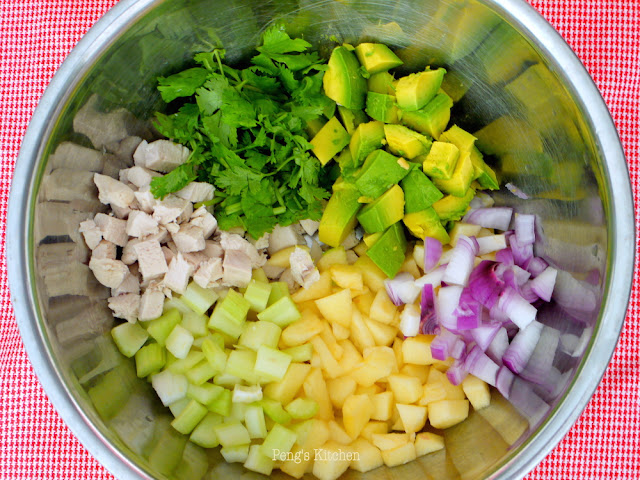 Method: 1 ripen avocado diced, 1 cup cooked chicken breast diced, 1 apple diced, 1/4 cup chopped celery, 1/4 cup chopped red onion, handful of chopped coriander. Add 2 tsp lime juice, salt & black pepper to taste and mix everything! No mayonnaise required and is healthier! The creamy mashed avocado helps to bind all ingredients up. This can be served on its own or as filling in sandwiches. 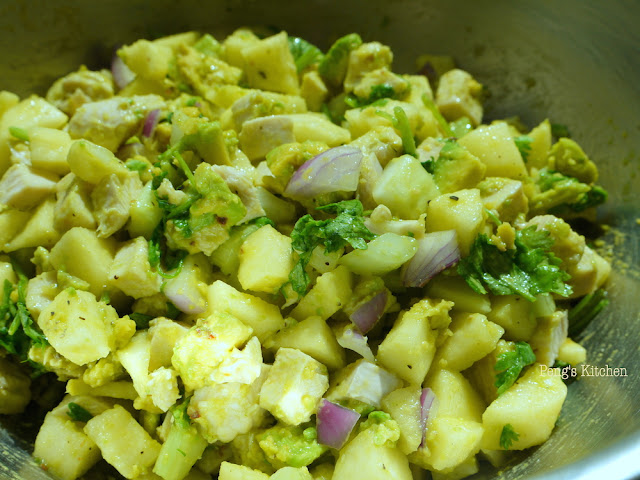 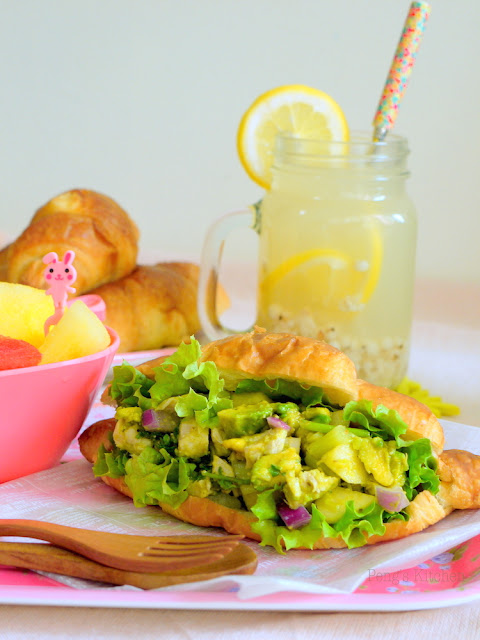 Revisiting this steamed ribs in pumpkin I done few years back. :) As my kids are now more accustomed to spicy dishes, I've added the chilli into the stir-frying rather then omitting it out. I find it tasted much better with a tinge of spiciness in the gravy! 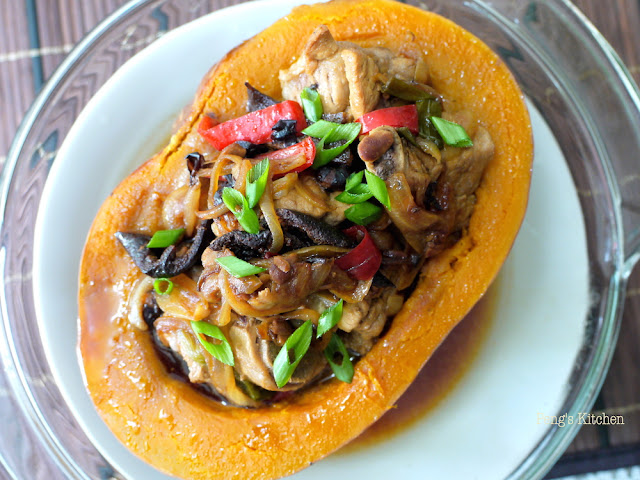 Remove seeds and slice off the bottom slightly so that it can 'sit' in a casserole. 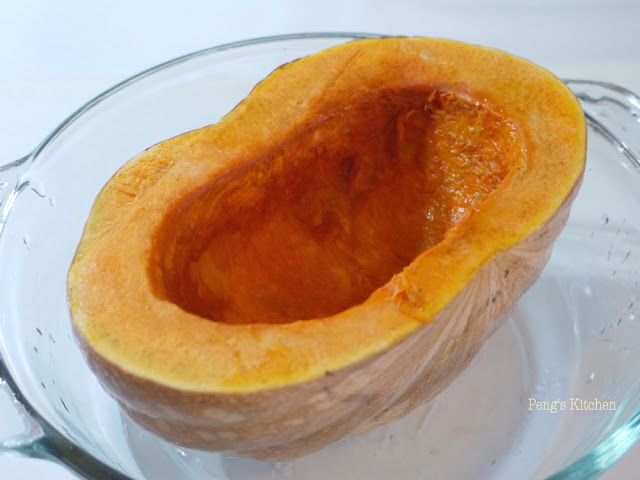 Hmmm why is there a piece of papaya with the pork ribs!? As I have modified the recipe, the steaming duration has reduced significantly. To ensure the ribs are tender enough, I've mashed up the papaya and coated with the ribs for a while before blanching them in boiling water! Besides using papaya, you can try ginger and pineapple as they contain natural vegetable enzymes which helps to dissolve the protein and connective tissue, i.e....natural meat tenderizer! 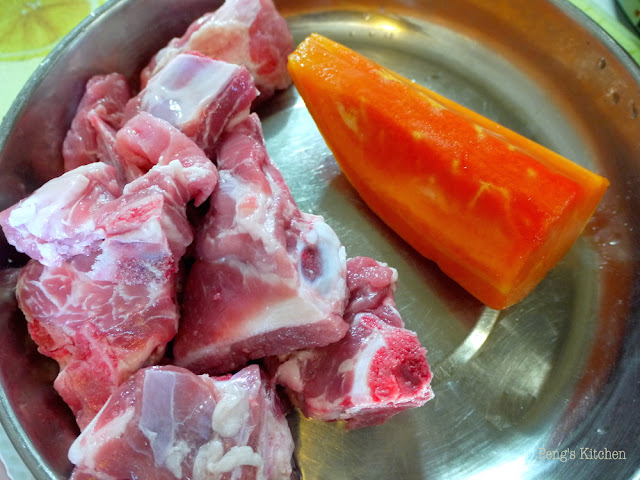 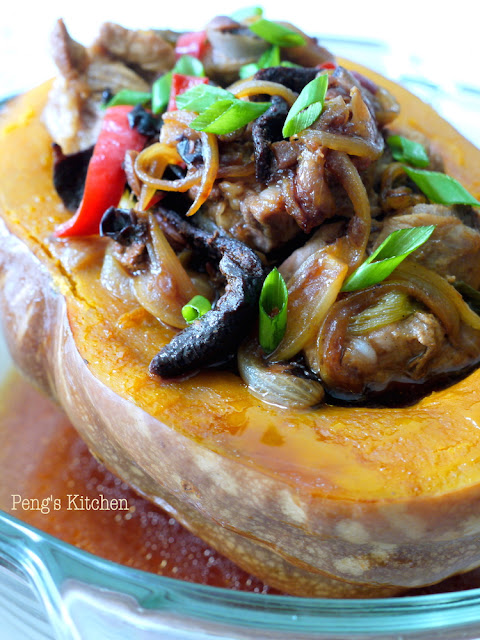 Scoop out the steamed pork ribs and gravy and serve along with the pumpkin at the side. My kids could not stop asking for more gravy over their rice! 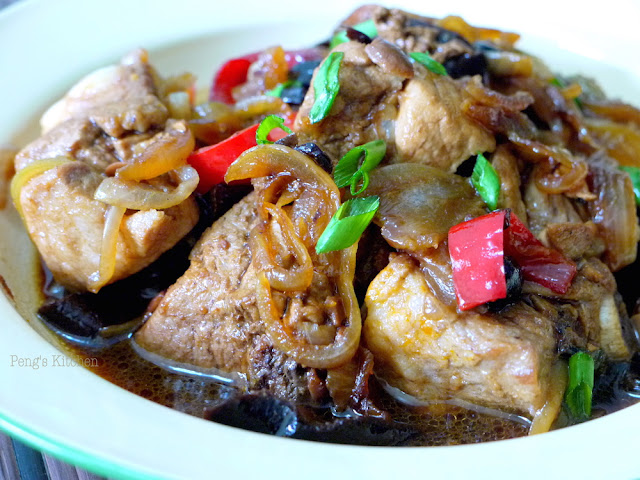 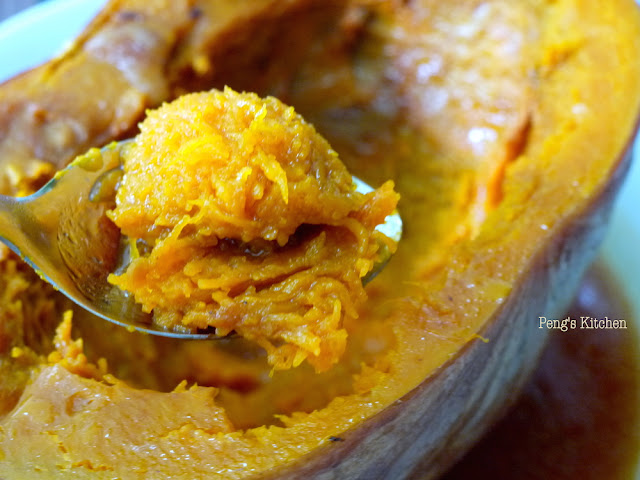 Recently a few videos of making sushi cake keep popping on my Facebook timeline. It indeed looks very visually appealing and prompted me to google over this sushi cake! After a few references on the internet (video ref here & here), I hereby present my pretty sushi cake! Hehehe no special occasion just wanna make a beautiful 'cake' to uplift the mood ;) 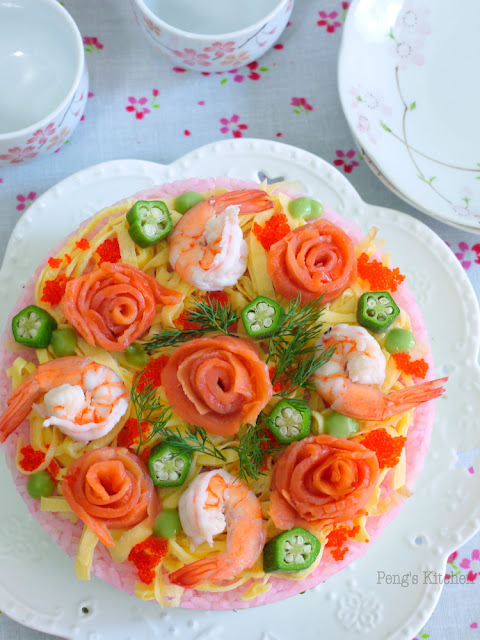 It is really straight forward to make this sushi cake. No complicated steps, try making one to impress your family! :D 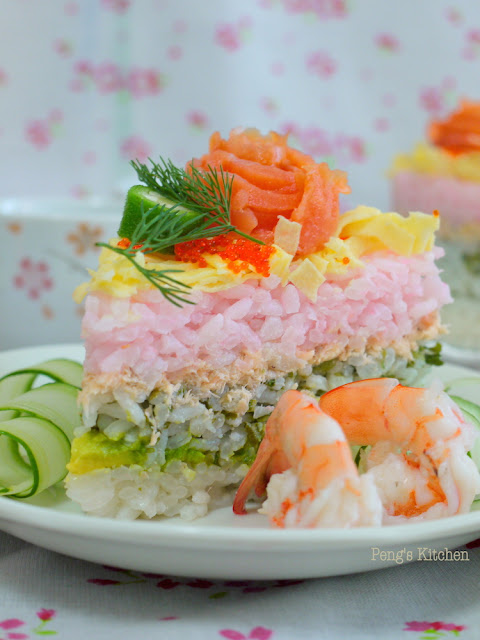 Steps in layering the sushi cake. Sliced avocado and salmon mayonnaise are used in between the layerings. 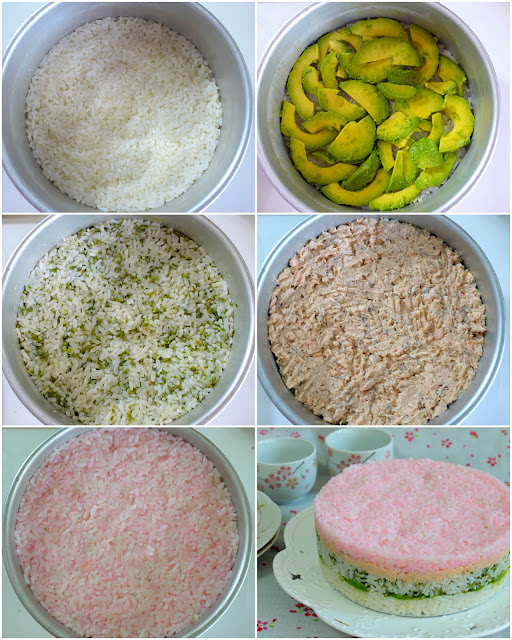 aonori and sakura denbu to create the coloured rice 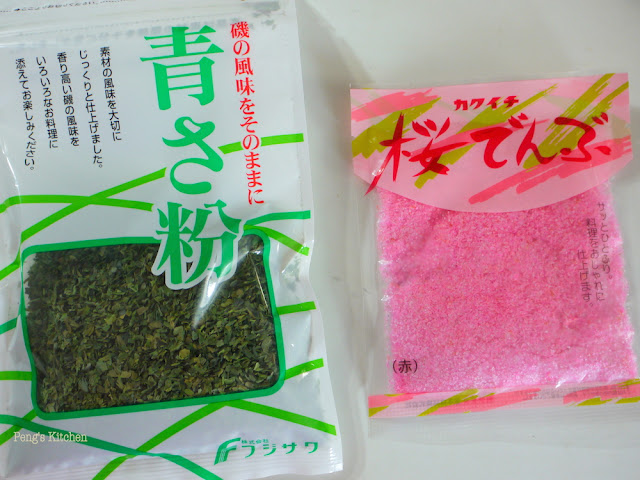 Homemade Sushi Vinegar
Filling for sushi cake
* 200gm fresh salmon, seasoned with black pepper and salt. Seal in baking paper, bake @200 deg cel for 15 mins until cook through. Flaked the salmon and mix in 3 heaps tbsp mayonnaise. Chilled in fridge until ready to be used.

Decorations
* Beat 2 eggs with 1 tbsp mirin. Sieve mixture. Heat and lightly grease a non-stick pan. Ladle in some egg mixture and cook into thin omelette. Repeat till egg mixture are used up. Stack up thin omelette and thinly slice into stripes.  Chilled in fridge until ready to be used. Amazingly beautiful after placing the toppings all over the surface! 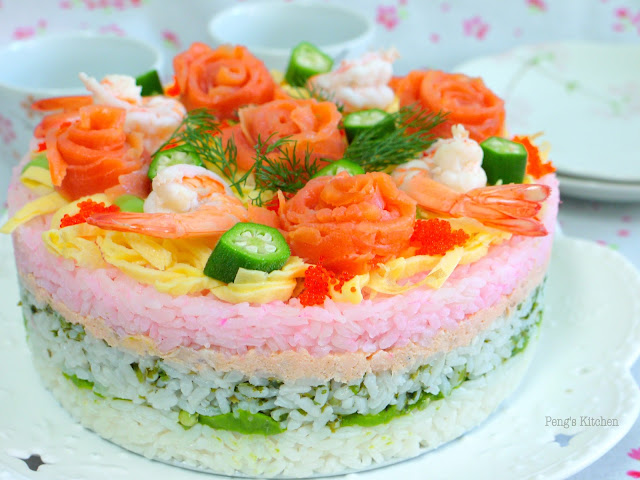 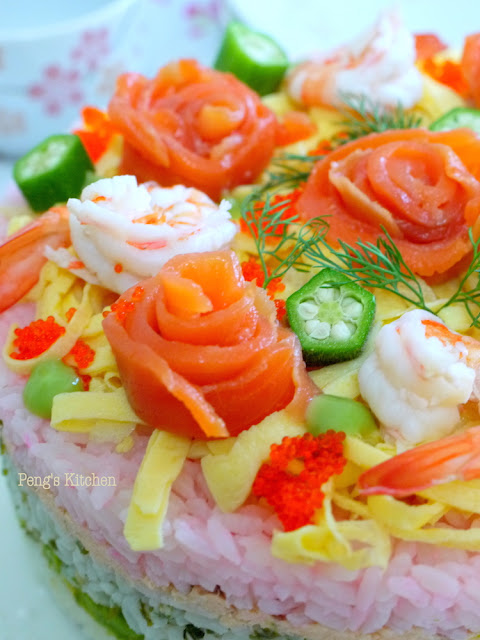 Luckily the sushi cake is compact enough and it did not disintegrate after slicing ;) 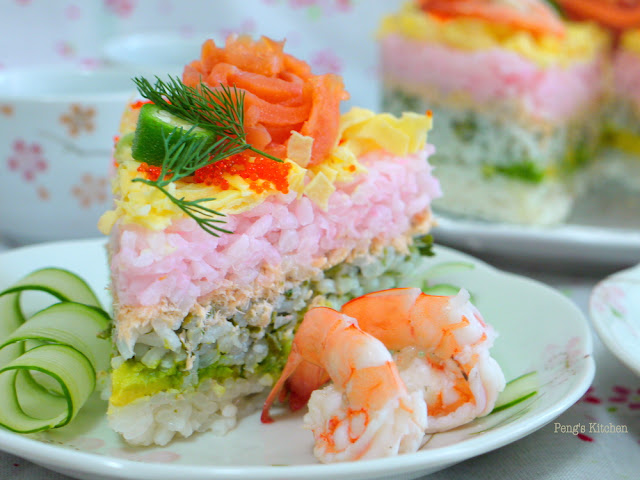