Not exactly 7 rainbow shades but still pleasing to the eyes :) but quite tedious to divide the batter into portions...4 colours = 4 mixing bowl = more washing up to do! hahaha...After moulding the cake, I used a serrated knife to shave off the outer skin of the chiffon to reveal the rainbow layer. As I added strawberry paste instead of red colouring in the pink layer, the cake has a slight trace of strawberry flavour :) 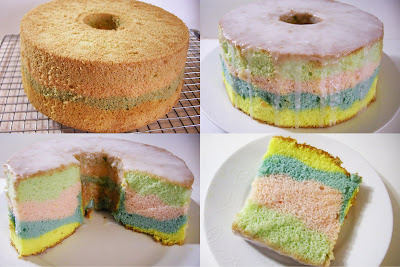 So nice! Reminds me of those rainbow bread I used to eat with ice cream as a little girl. Actually, I think some of those ice cream kiosks still offer it. Slurp!
Thanks for sharing :)

So pretty! What a great idea.

Wow, very pretty chiffon cake! If you didn't remove the crust, it will surprise anyone who cuts out the cake. :)

wow,at the first outer layer,honestly it looks dull but as you shave off the outer layer of the rainbow chiffon cake i was really surprised.it's very nice to the eyes especially for kids.i really love your idea.
thanks for sharing it. :)

Gosh, this looks fabulous. Reward is truly gratifying when you see the nice colours of the cake! Well done!

so pretty! And lovely texture! =)

All the layers rised nicely! So pretty! :)

TL...hahaha. Dun think I will make the 6 colours rainbow cupcakes loz if not will ganna BANNED in baking wahahaha..I done this rainbow chiffon ah lao already 'not happy' liao >o<, 'can u dun feed colourings to ur kids' he commented....

Peng, hahahaha. If ah lao so sensitive about the colouring, then better not do the rainbow cuppies. I find that once in a while is ok lah, not often. :P

Peng, the cake is so pretty!