This recipe is extracted from Alex Goh recipe book which I've bought few days ago! This cake is so cottony soft, like Japanese cheesecake but without the cheese taste :D I've also learnt something new from the book on beating egg whites. He mentioned that for chiffon cake to be fluffy & large, the whites have to beat till stiff. But if the cake is to be baked in a shallow pan instead, the egg whites should not be overbeat, which means stop at soft peak formed! This will ensure the cake will not be overly shrunk after baking. Indeed I try his method and my steamed bake cake only shrink slightly after cooling down. 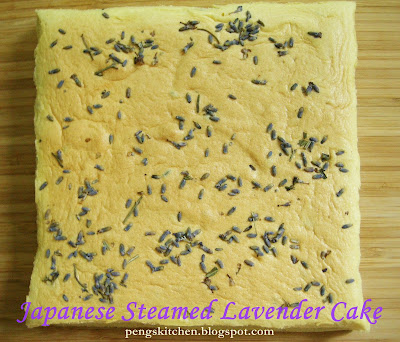 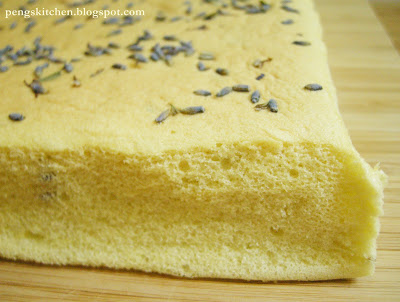 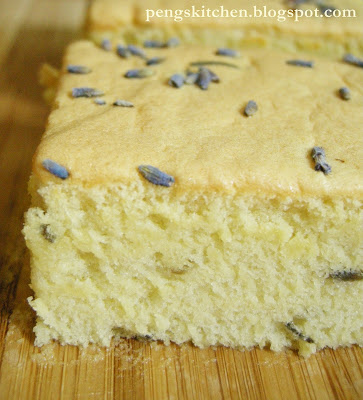 I don't eat most of this stuff but it all looks so pretty. You're very good at this. ^^

wow, i really love to see the softness in this cake and thanks for the tips on egg whites!

Hi Peng, can I know where to buy the lavender stuff? By the way, do you know how to bake Hokkaido cake, the one with cream inside? Thanks.

Iris...u can get at flowers at certain Chinese medical hall! If not Tangs baesment shop do sell ;) oh Hokkaido cupcakes still in my to do list! Hehehe waiting for my pretty cupcakes cases to arrive! ;)

I don't have any kind of scale that would let me measure grams, cann someone please translate this to cup and tbsp. measurements? Thank you.

Elora Laird...u can google on web for baking conversion chart, thank you.