Extracted from Wikipedia : 'Niángāo, Year cake or Chinese New Year's cake is a food prepared from glutinous rice and consumed in Chinese cuisine. It is available in Asian supermarkets and from health food stores. While it can be eaten all year round, traditionally it is most popular during Chinese New Year. It is considered good luck to eat nian gao during this time, because "nian gao" is a homonym for "higher year." The Chinese word 粘 (nián), meaning "sticky", is identical in sound to 年, meaning "year", and the word 糕 (gāo), meaning "cake" is identical in sound to 高, meaning "high". As such, eating nian gao has the symbolism of raising oneself higher in each coming year (年年高升 niánnián gāoshēng).

In fact this is the very first time I cook and eat this savaoury stir-fry rice cake! ^-* Seems like over here we prefer the sweet caramel rice cake which steamed in banana leaves. I always seen this '白粿干' in supermarket but clueless on how to prepare it so I make some research online before embarking the cooking of these dishes :D

There are 2 ways of reconstituting the dried rice cake. Either by boiling it immediately in boiling water till soften or soak overnight follow by steaming them till soften. I tried the soaking & steaming method. Though after steaming the rice cake is soft and chewy but some of the pieces stuck together! I immediately throw the steamed rice cake into a bowl of cold water to separate the pieces. Luckily my steamed rice cake did not become a mass of sticky rice dough :P Maybe I should have boiled them directly in boiling water instead.

As I prefer more gravy in the dishes, I've added more stock than the stated original recipe and it also helps to prevent the rice cakes from sticking onto the wok! So which dish is more appealing to you?? ^-^ Personally I like the seafood version 'cos there are so many ingredients inside! 希望小孩吃了学业成绩高高高， 成人事业更上一层楼，薪水高高高!!! hahaha.... 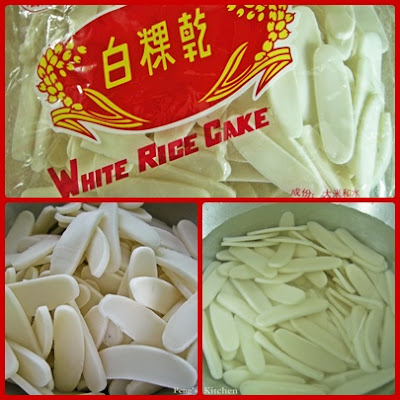 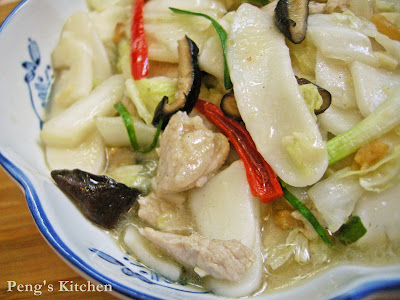 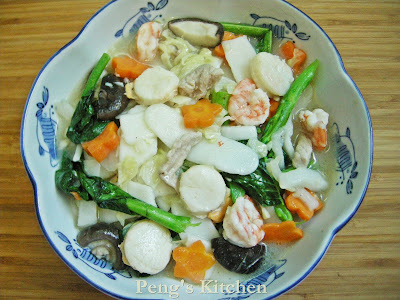 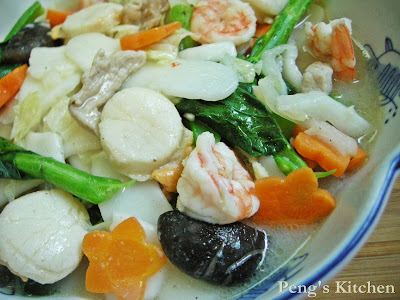 Recipe modified from Yum Yum Magazine
Ingredient
Method
Note : Balance dish can be stored and chilled in fridge. Before consuming just steam till warm through. Do not use microwave as it may harden the rice cake! But best serve on the same day.
I am submitting this recipe to Aspiring Bakers #15: Auspicious Dishes for CNY (January 2012) hosted by Wen of Wen's Delight
Posted by Peng at 8:33 PM

There's one hawker stall in KL that specializes in cooking this.
Ate it once and somehow....I can't make myself enjoy its stickiness.

Wendy...hmmm stickiness...this one I cooked still got a bit of chewy texture :D nvr taste b4 so I find my one quite tasty lol

This is a lovely CNY dishes! My family cooked it once a while too but we used Korean rice cake where no soaking required. Thanks for your submission! Happy New Year!

This Shanghai traditional dish is always my fav. I think you have re-created it very well. Yum!

I love to eat nian gao! We usually soak it in water in the morning and then add it directly into the wok. That way, it 'cooks' and absorbs the sauce.